You are here: Home > Paddling in the Pacific Northwest

Today begins a 4-week guest blogger mini-series in which kayak and SUP experts share thoughts, tips, and insights about the sports that they love. Port Angeles adventurer Chris Duff, who has solo circumnavigated Great Britain, Ireland, and New Zealand as well as the eastern third of the U.S. and Canada by sea kayak, kicks off the series with his reflections on paddling the waters closer to home. You can see photos and hear stories about Chris’s expeditions during his Festival keynote presentation at Port Angeles’ Red Lion Hotel on Saturday, April 12th, from 7:30 p.m. to 9:30 p.m.

I don’t know if there is another place in the “lower 48’s” that offers as much in the way of paddling as our area does. Within a two hour drive west of Port Angeles you can be paddling the exposed outer coast of the 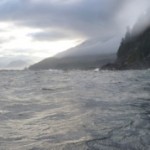 Olympic Peninsula with its surf, tidal currents, and caves of Cape Flattery. There’s a really good chance of seeing whales, a certainty of seals and eagles, and you’re not going to be battling crowds, either on the roads or the water.

From Port Angeles (PA is easier and less formal), if you go east instead of west, you can drive to Anacortes and be on the edge of the San Juan Islands for a totally different type of paddling, with a choice of serene idyllic water or the challenge of extreme tidal races. 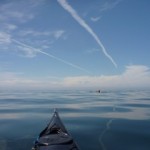 There is surfing at the mouth of the Elwha River just fifteen minutes from PA, rock hopping along the Straits of Juan De Fuca (twenty minutes), and, if you’re up for a bit of a challenge, and some serious off shore paddling, you can study the tidal and current atlas, train for the long haul, and head across to Victoria British Columbia (20 miles). It is all here. It’s just a matter of what you’re looking for and what skill level you have to bring to the sea.

The other benefit of living here is the proximity to Vancouver Island’s outer coast. Lisa and I did a three week paddling trip last summer from Port Hardy, near the northern tip of the island, down   to Ucluelet, just north of the Broken Island Group. The trip was on Lisa’s “Bucket List” and the best part was that she wanted me to go with her! Throughout those three weeks we lived and breathed everything that is the outer coast:  sea otters, whales, sea lions, wind, fog, incredible camps, glassy seas some days and wild chaotic seas the next. We swam in freshwater streams, walked along the deserted sandy beaches, photographed palm-sized wolf tracks around our tent in the mornings, and surfed following seas with a very playful sea lion pup as a companion. 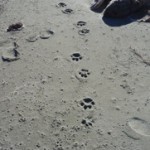 Instead of paddling all the way back to Port Angeles, as was our original plan, we slowed down, cut the miles almost in half and just enjoyed every minute of the journey. We discovered places along the way that we want to go back to – places that needed more time to explore; a rocky low headland that had the most beautifully polished stones, an island camp with pot-hole tide pools filled with waving sea grasses backed with a glistening white beach of tiny sea shells. We are already planning a group paddle with two other couples who we have done week-long trips with. We want to share what we discovered along our route. And in that sharing, we will draw closer around the evening meals, around the fire, and in the shared load of carrying the boats to the water for the next day’s adventure. And isn’t that the magic of paddling; of setting the time aside to go slowly and purposefully into the realm of the sea, and to allow it to challenge and to change us; to make us more appreciative of this fragile, beautiful environment that we need to protect and draw attention to. 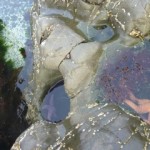 So maybe we’ll see you on the water. I hope so. I like to learn from other paddlers. Hear their stories and see their excitement in their own discoveries. We are all the same aren’t we? All visitors on  the same sea; each on their own learning curve; exploring, reaching, learning and sharing.