You are here: Home > How to Prepare for Debacles and Chaos while Sea Kayaking

Today’s post is by Deb Volturno, an ACA Level 5 ITE in Coastal Kayaking and a Level 3 IT in Surf Kayaking. Deb has been instructing for more than 20 years, and is a contributor to several kayaking books, videos/dvds, and magazines. She will be teaching Rock Gardening, Surf Zone Tactics, and “Debacle Deterrent” classes at the Port Angeles Kayak & Film Festival. Don’t miss the opportunity to learn valuable skills from this accomplished kayaker and instructor!

Sea kayakers can experience marvelous adventures by simply getting on the water, especially in the Pacific Northwest. Often we are in a wilderness environment as soon as we launch from the beach. Therein lies the magic! However, like entering any wilderness, we become vulnerable to the inherent risk of that environment. Add to that the fact that sea kayakers spend most of their time in one of the most dynamic wilderness environments on our planet – the zone where the sea meets the shore – and the risk is multiplied. That’s where the notion of “debacle deterrent and chaos control” comes in – otherwise known as risk assessment and incident management. Planning and being prepared can buy you a lot of peace of mind and afford you more enjoyment on the water! 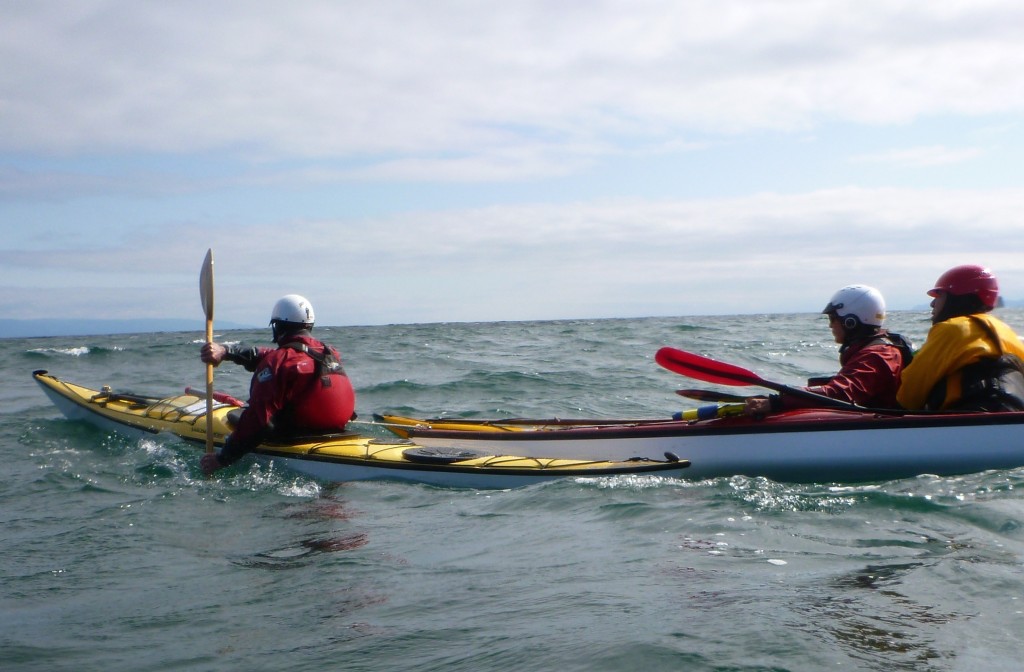 Certainly it’s best to be as prepared as possible even before you launch. Know your gear, check the weather and sea forecast, check the tides and current, know where the bailouts are, make a plan and let somebody know what it is, and, of course, never forget the dark chocolate! Make the plan, but have some alternatives in mind, because plans often change – for me it’s because of my own personal distractions as much as the conditions changing! It’s always good to know where the mocha stand is, because sometimes that’s the better call than launching!

Once on the water, it’s worth considering the eventuality that the unexpected probably will occur. It’s the nature of the sea! It might be something extra-special and benign like seeing a sea otter with a pup swimming up and gnawing on your grab handle, or rounding a point to see an eagle “swimming” with a salmon in its talons. The Pacific Northwest IS an extraordinary place! But equally, there can be challenges that arise, like a gray whale swimming under your kayak, and in your excitement to get a better look, you accidentally capsize. Yikes! But if you’ve prepared for a capsize by practicing your skills ahead of time, you spontaneously kick into your self-rescue, and then savor how exciting it was to see the whale. The thing is that we can never plan and prepare for all the things that could happen. For me, that’s one of the most alluring parts of sea kayaking – that element of the unknown!

We can gain skills by just letting our imagination come up with a few possible situations or scenarios that we might encounter while paddling. Thinking about worst case scenarios is a good start – an unplanned capsize and swim, becoming separated from your kayak, having your buddy capsize and let go of their kayak, or being with somebody who finds themselves unable to paddle. From there we can get on the water and have fun practicing different solutions to the scenarios! The “tools” you gain will enhance your ability to problem-solve and adapt as challenges develop!

It’s entropy, the natural tendency toward disorder in our universe, that assures that chaos will occur. I’m convinced that entropy is a much stronger force on the sea. Surprisingly, debacles have even unfolded during Debacle Deterrent, Chaos Control classes – that were truly unrelated to the class! Once, we rescued a sailboat that had run aground, and another time, we rescued a large buoy that had broken free from its mooring. In another class situation, we rounded a point to find a dock floating free in the current – with a motorboat still tied up to it! In all cases, we were able to respond effectively using skills we had practiced. I think the ‘take away’ is that if we’ve practiced skills and some varied scenarios ahead of time, and we have good judgment, of course, we can confidently and effectively help out in a debacle – and not add to the chaos! Isn’t it rewarding when you know you can help someone who needs it because you have the skills, rather than be a spectator because you don’t?!

As a paddler some basics should be in place: have reliable self and assisted rescue skills for the conditions in which you’ll be paddling, always tuck and protect when you capsize, never let go of your kayak, take the time to get the information you need before you launch, engage your brain for good judgment and good decision-making, and finally, never kayak where you’re not willing to swim. These offer an excellent foundation from which to develop debacle deterrent and chaos control skills. 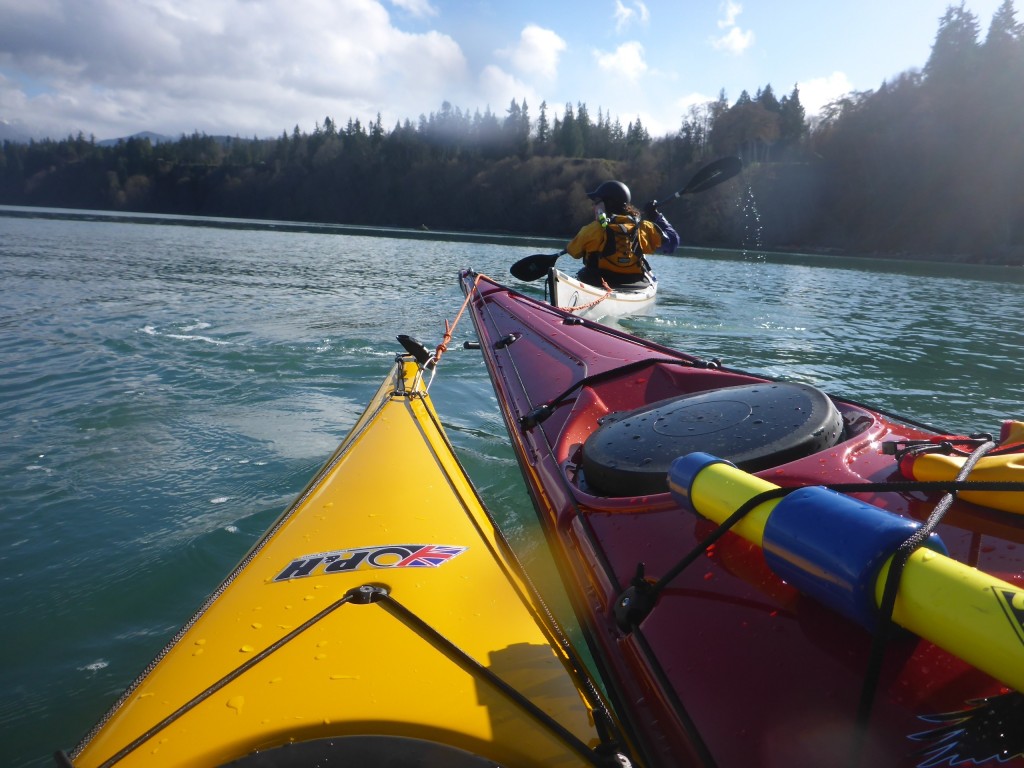 I recommend a minimum of three additional skills to what most sea kayakers learn in a beginning class that would be useful in all sorts of debacles and chaos. First, get a tow system that works for you, and learn how to use it. Be sure it can be deployed quickly, and released quickly. Having a tow system at the ready, and knowing how to tow from your kayak will empower you to deal effectively with all sorts of scenarios where someone is unable to paddle. Easy solution, minimal output, big effect on a positive result. I suggest that you investigate the different methods of towing also.

The other two skills that I recommend are related and can save your life or anyone else who is separated their kayak. One, learn how to reliably get up onto the back deck of someone else’s kayak, and two, become comfortable with someone climbing up on to your back deck. The person on the back deck must position themselves low on their belly, close to the paddler so their arms can grip the sides of the cockpit coaming or around the paddler, and let their legs hang over either side of the kayak. Once the person is securely on the back deck, the paddler can paddle to safety, whether it’s back to the empty kayak, or the beach. Using this technique, I saved the life of a swimmer who was swept out to sea in a powerful tide rip. 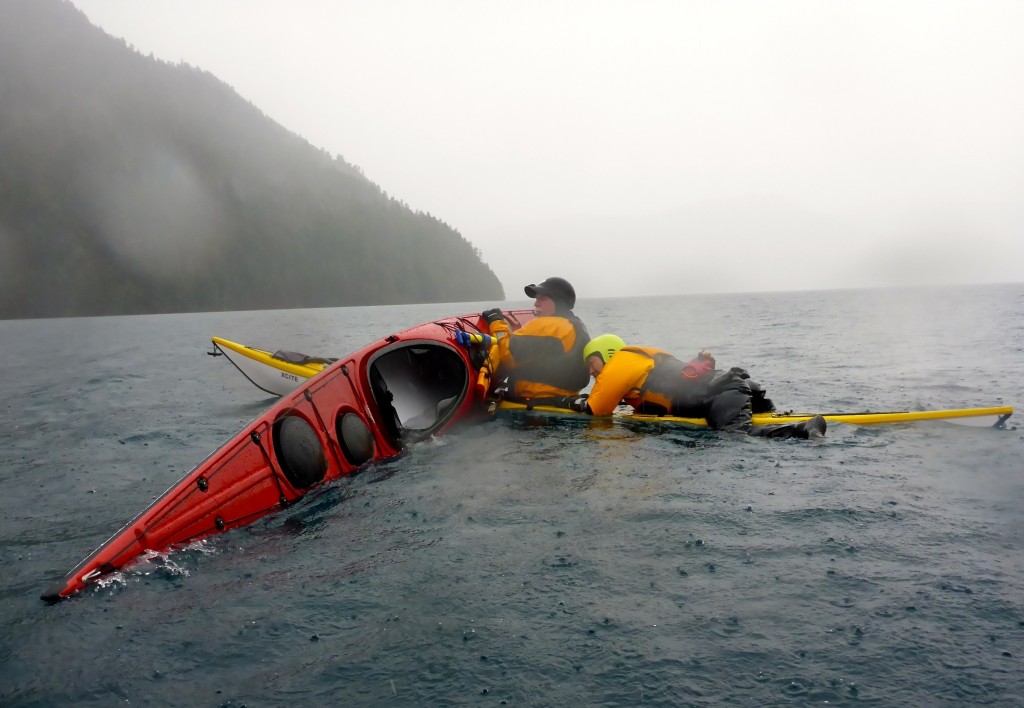 Practicing your skills and playing with different scenarios will help you gain confidence and add to your “bag of tricks”. Be ready to improvise, because debacles and chaos tend to be things you never could have imagined! Improvising is easier when you can draw from what you already know. Know what works, why it works, go paddling, and be ready to apply what you’ve learned. In other words practice your skills, but also use your brain! Judgment and decision making are arguably more important than skills. Your skills might not be able to override a bad judgment call! 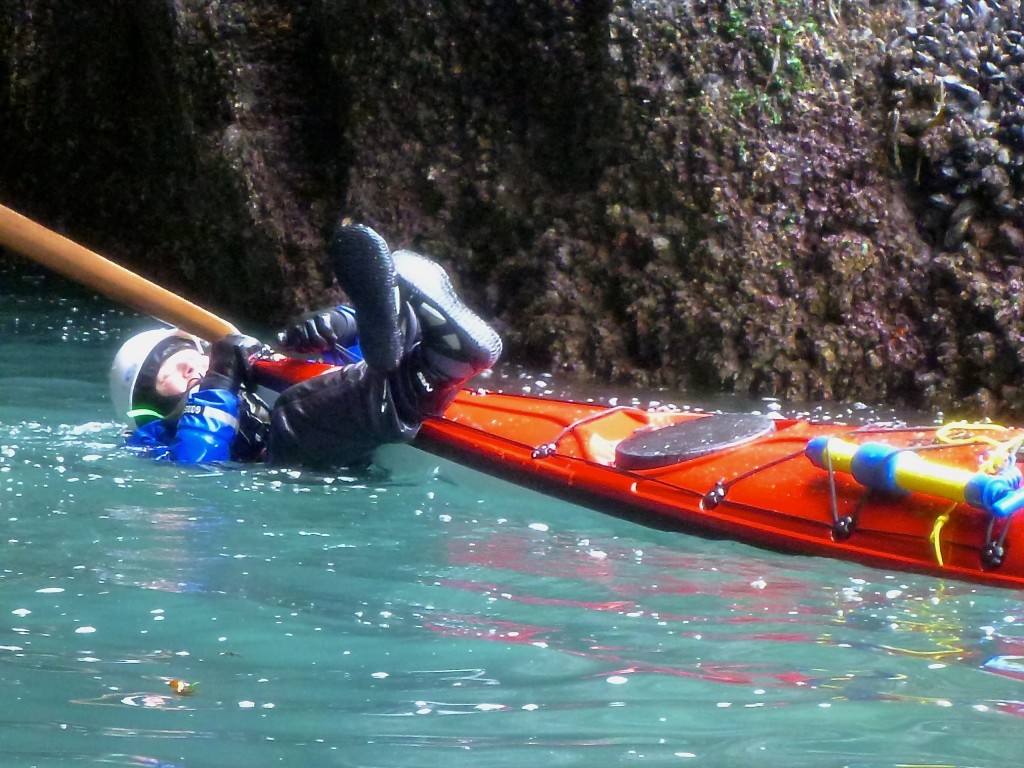 If you don’t “put yourself in the picture”… you can’t be afforded all the wonder of what’s out there, but if you’re not prepared, you might just wonder what the heck you’re going to do when a debacle presents itself. Expand your imagination to create scenarios, practice your skills in controlled conditions, let the lessons unfold, and continue to add to your “tool box.” If you end up with a “garage sale” of all your gear floating around, be sure you’ve planned for everything to wash in or blow back to the beach! Warning: kayakers are notorious opportunists, so if you don’t contain your gear, there is a well understood law of the sea called “salvage rights” – what gets away could end up belonging to someone else!

Safety is a serious subject, but preparing and practicing to be as safe as possible can be a lot of fun. Get out there and play your way to becoming a safer kayaker! Another option is to sign up for the “Debacle Deterrent, Chaos Control” class at the Port Angeles Kayak & Film Festival. Hope to see you there! 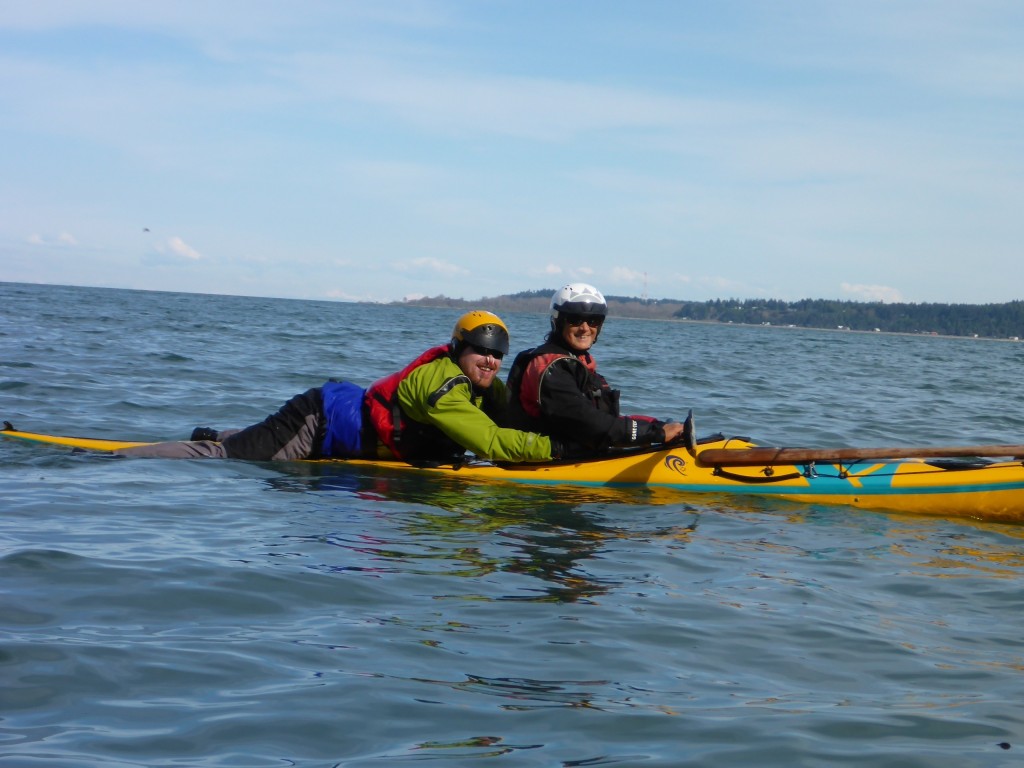